I’ve been looking around for some frame sliders for the Tracer, and indeed found quite a few which seemed to fit the bill with it being based on the fairly popular MT-09 and all.

As you could expect, the two two main types for my model were the ‘single bolt and puck’ type, and those which used two bolts per side with the slider puck somewhere in the middle on a bar or mount.   Despite being a little more expensive, I decided to go for the latter two-bolts-per-side type as I think they’d disperse any inpact force a little better, and frankly I quite like the look of them. I also thought it’d be something different to install, as I’d only had the single bolt type on previous bikes.

Truthfully, I’ve been lucky over the years not to drop or slide my bikes too often, but the Tracer is quite tall for me, and I’ve felt it almost go when doing some slow, tight U-turns down mountain roads which had suddenly stopped being roads, so once more I thought I’d get some sliders on, just in case.

After a bit of thinking, reading, more thinking, and several cups of tea, I’d narrowed it down to either a set from German manufacturer SW Motech, or some from a Japanese company called Baby Face. The Motech ones look nice, they’re well made and angular like the Tracer. The Baby Face ones look more traditional, with the more tubular style puck but the two piece bar is a very nice piece of engineering. Partly because they looked chunky, and partly because a friend is a distributor who tends to only represent decent kit, I thought I’d give the Japanese manufacturer BabyFace a go.  Price wise here in Japan they’re quite similar.

The sliders arrived in a well packed box with the contents shown above – all in a kind of vacuum bubble wrap, and with some very basic instructions. Very. Basic. Those instructions had an odd blowup diagram of the assembly, some generic warnings (‘don’t fit these when the engine is hot’), some general torque guidance for their bolts, and a request to consult your bike’s service manual for specific mounting bolt torques. There’ s also a parts and spec list, but none of the parts themselves have numbers on them, so be sure to measure and know which part is which. 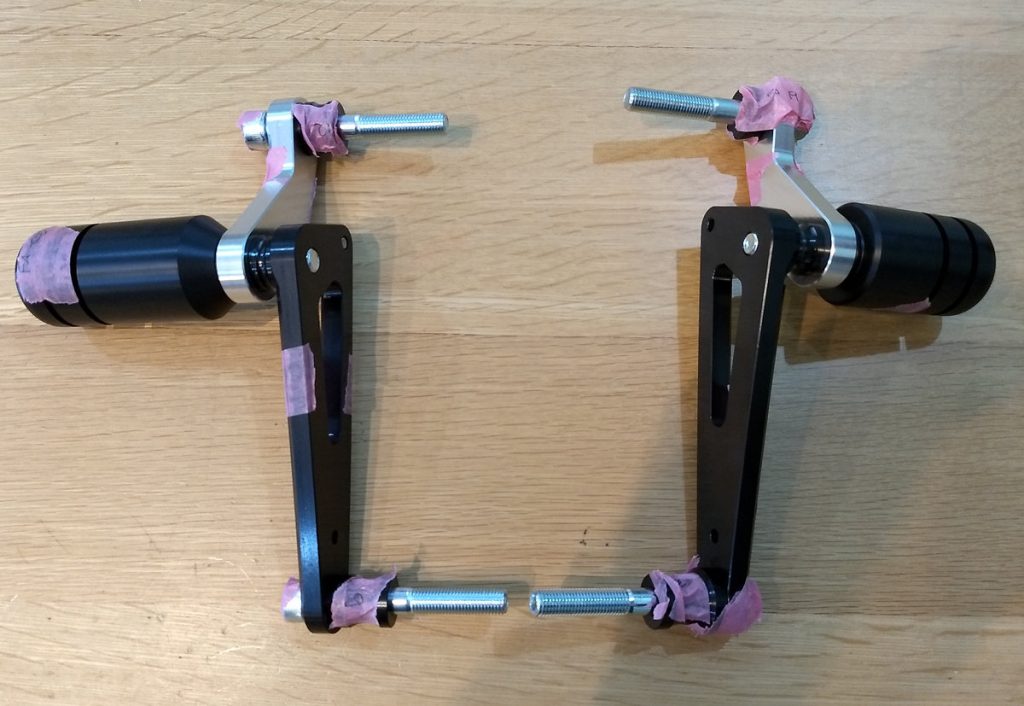 I dry assembled them, and beautifully labelled them with premium masking tape, in an attractive shade of pink. You can see the two parts which form the bar are quite chunky, but they’re light, and even when only lightly tightened, they feel incredibly rigid.

Next up was fitting them to the bike.

Per instructions and experience, I’d need some threadlock, for which I defaulted to Loctite Blue 243 which hasn’t failed me yet. The rest are the usual hex bits and the required torque wrenches.

The instructions recommend an engine jack, but since I don’t have access to a specific motorcycle one, I simply put the  bike on its centre stand, then  a car jack under the engine until I could feel it taking some weight, and the bike didn’t move.

From that I just went one bolt at a time, doing first the left, then the right slider. It was actually simpler than expected. Only one of the original Yamaha bolts had any threadlock on it, but for scale I put a small drop on each of the four engine bolts. Each bolt I removed I labelled and put in a ziploc. Force of habit.

Basically, remove a bolt, clean the theads and washer (as it would be re-used), thread the new BabyFace bolt through the slider assembly and washer and into the hole,  hand tighten, then do the second bolt for that side and then torque them both down. No problems.

As you can see, they suit the style and colour of the Tracer, so I’m really pleased with them, and despite the sparse instructions, fitting was a breeze likely thanks to the quality engineering.

As expected, they feel incredibly solid on the bike, fit in to the design and in a good way, disappear. 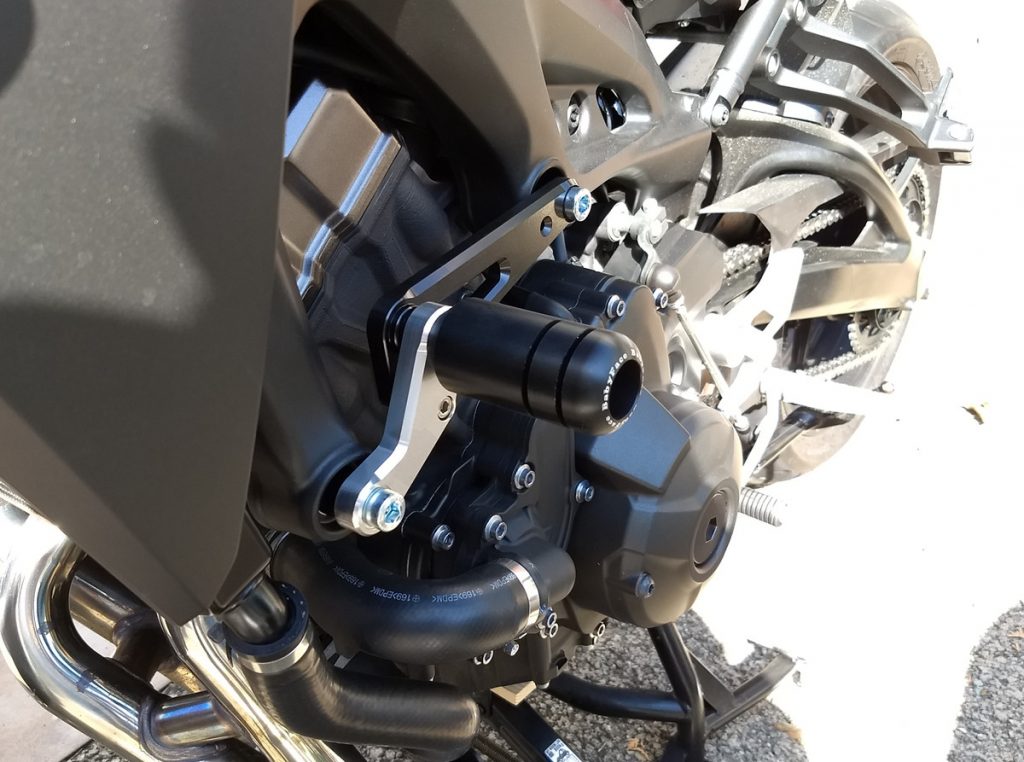 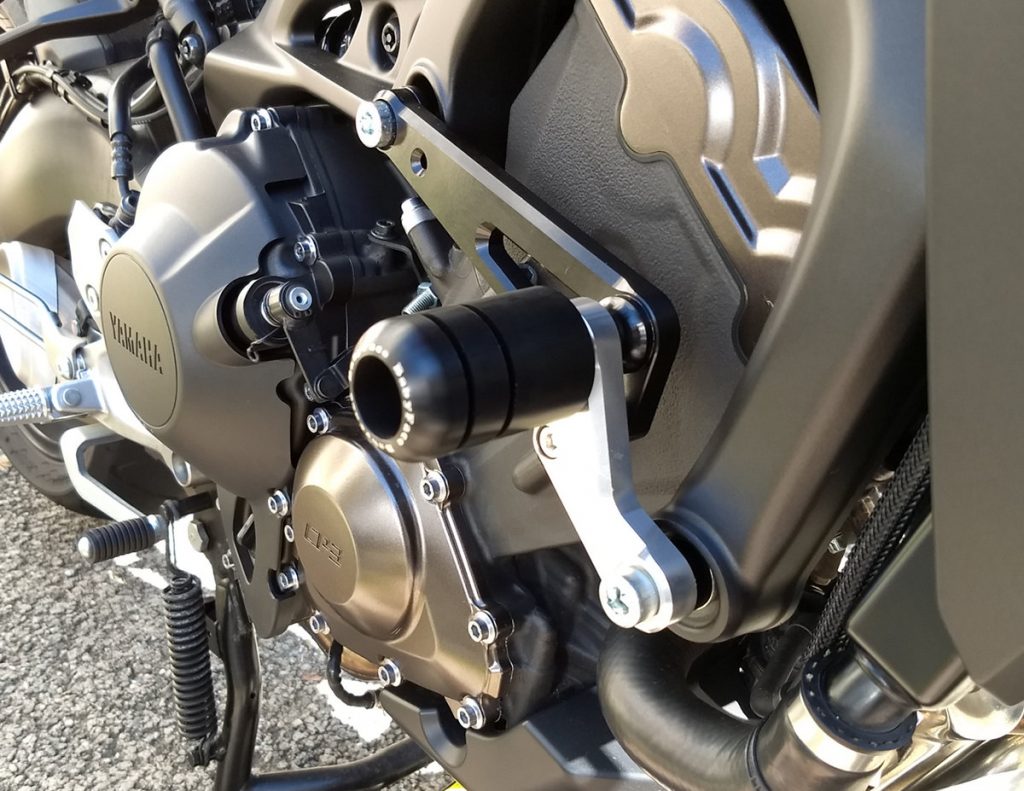