I don’t remember seeing snow during March in our area, so it was odd driving back from the AutoBACs car service and accessories shop on Saturday, March 14th, to see thick flakes falling. Even more surprising given the mild Winter we’d been having. Fortunately it had been a miserable and wet morning so that at least near sea level it didn’t settle.

When Sunday morning rolled around I went out on the bike taking the coast road down to Manazuru. I don’t know how many times I’ve taken that winding road down to the harbour, but for the first time I decided to stop down by the jetty and had a cup of tea in the light rain, watching some people fishing. Hailing from a (slightly larger) fishing town, I find boats and the sea quite relaxing and familiar.

What I wasn’t expecting was that slight drizzle turning into hail stones – lucky I had a helmet I suppose. After a walk around the place, getting some confused looks, I made my way around the peninsula, and headed towards the Route 75 Tsubaki line, a nice little set of twisties up to the old standard Anest Skylounge cafe.

I planned to get to the Tsubaki line via the Orange line – a short run bypassing central Yugawara town with some nice views of the valley, but as I rounded the curving uphill at the beginning I remembered the road had been closed at the other end following last years typhoons. It still is. Cue a quick U Turn. Sure, I could have gone all the way back, and up through the main town road, but instead I decided to try a little road which according to OpenStreetMap was a nice direct shortcut. Of course a short cut into a valley means we’re looking at vertical, and it was. Very. As I made my way down narrow roads at what felt like 45degrees, navigating metal grates and cracked asphalt, on a road only just wide enough for a single car, winding my way down with drains and houses on both sides, I was just hoping no one was coming the other way. Fortunately, I got lucky and no one did. Fun road, so I put a pin in the map for it.

The Tsubaki line from there is about 15Km of uphill curves, enjoyed by those on both two wheels and four. I made my way up initially at a fairly leisurely speed limit pace, testing myself on corners, focussing on entry, exit and throttle control, making sure I wasn’t picking up any bad habits. After a few kilometers I noticed some snow on the odd leaf, and bits at the side of the road, and it was getting a misty. As I got further up, the amount of snow by the sides of the road was getting notably deeper. I was taking care into corners to make sure there wasn’t any ice, and it seemed there wasn’t, but given visibility was down to ‘smoking carriage on a bullet train’ levels, I was keeping a fairly conservative line through pretty much every corner. I saw one car coming down, at least suggesting the road stayed passable, and the last 5Km was mainly making sure to avoid clumps of snow which had fallen from overhead branches. Yes, this was fun.

As I rounded the last corner to the cafe, I only really knew I was there due to the sign as I passed it, the mist was so thick. Fortunately there were a few other bikers in the car park who told me that the roads were good for getting down on the other side.

As you can see, there was plenty of snow and mist. However, I still couldn’t see any ice. I suspect this is because some of the roads are heated by water piped in and making use of local volcanic activity, which regular snow resorts often do.

In a strange twist, after I came out of the cafe, and was drinking some tea in the carpark, someone I’d never met before in person from a motorcycle group I’m a member of on the LINE application, came over and introduced himself. He’d just arrived and seen the photo above I’d posted to the chat about 15 minutes earlier! It was good to put a face to the name for sure, and it just about summed the day up. We talked about some road conditions and when he went to get breakfast in the cafe, I headed down through the mist, watching the snow get thinner on the bushes before the more familiar green became the predominant cover.

I thought that was the latest I’d seen snow in Kanagawa at lower reaches, but just 10 days later it snowed again. Strange times indeed. Stay safe out there, socially distancing on two wheels! 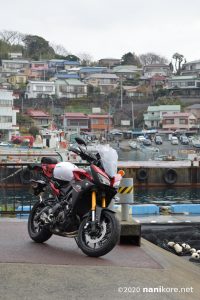 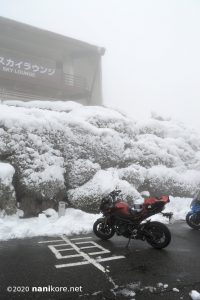 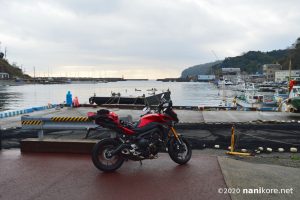 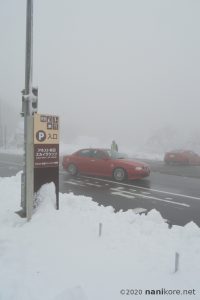 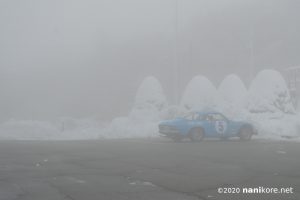 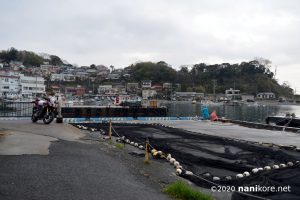 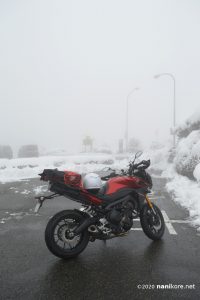