In April 2018 I decided to purchase some Bluetooth based intercom units for use on the motorized bicycle. There’s a huge selection of products available, across a broad range of price points, so after some thinking, then some reading, and some more thinking, and then a cup of tea, I chose a pair of Cardo Freecom4 units.

The main thing about buying anything is that it fits existing needs and might have some growth space for the future. These were my main requirements going in:

Those aren’t big asks these days, but it’s easy to blow past your budget to achieve them. At the lower end of the spectrum, we had devices which work with a phone and a navigation system, but not a passenger, then those which would hit my requirements, all the way up to post Bluetooth mesh network systems.

Like many, I ended up looking at some Sena models and some Cardo ones. They both have higher end models, but Cardo have a range called Freecom which sits below their premium Packtalk range. The Freecom 1 is for using by yourself with a phone and GPS, Freecom 2 connects to one other unit, and the Freecom 4 allows up to four units (and non Cardo units apparently).

This latter one was the one I chose – it’s since been upgraded to a 4+ model, but the 4 is still available new. Price wise, it was on offer I suspect as Cardo had announced new Packtalk Bold units a few months before, which I wasn’t interested in, so I managed to get two units (the ‘Duo’ pack) for about 30,000 yen including shipping from Amazon. I also bought an additional helmet kit (mic, speakers and stick on clip) for the kids helmet. 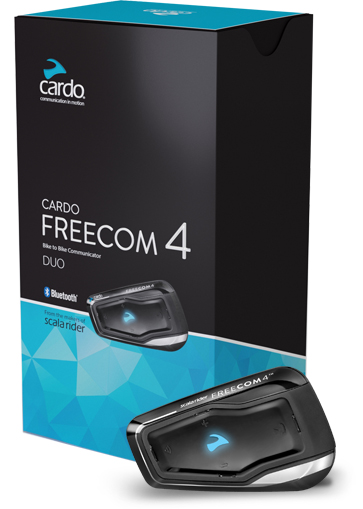 The units are surprisingly slim sort-of triangles with a button on each edge. It clips front to back into the helmet mount which is either stuck on, or clipped onto your lid. Our two adult helmets worked fine with the clips, but our junior/child helmet needed the stick-on holder, but it was just as simple and the 3M adhesive is sturdy. The buttons are mostly fine to hit with gloves, if you can remember what the combinations do – that can be a big ‘if’ sometimes.

The low profile speakers went in easily to the adult helmets which have allowances in the foam cushions, but were a little problematic on the junior helmet. However, the Freecom speakers connect via a standard 3.5mm jack (unlike some of the Senas), so we were able to use a small pair of earbuds in the junior helmet instead, and they worked fine, we just had to get them in to the child’s head before putting the helmet on. Unlike the speakers, the mic has a proprietary connector, but with just two wires it should be simple to rework through something more standard if you need to replace it. As it is, the included mic velcro’d easily inside all the helmets, though boom mics are also included for non full face helmets.  The sound quality is very respectable – intercom sounds good, music and podcasts sound very good.  Listening to entertainment isn’t in my general requirements, but if you like listening to tunes, the packed in speakers are likely good enough. They’re also loud enough you can hear directions over higher speed wind noise even with earplugs in, which is my more usual usage case.

Firmware updates are handled via Cardo’s ‘community‘ webpage, in conjunction with a download application, which as far as I can tell is Windows only.  Also, the page was not encrypted for some reason if that’s an issue for you. This same page is also where you can register your products, and set certain preferences. The firmware updater has worked well for me across 2 updates (to 2.0 & then 2.2) and both units – with update 3.1 coming out just a as I was writing this. Though it failed initially on 2.0, on the 2.2 update I could change the language on one of my units to Japanese. Oddly, although it’s a community page, there’s no official forum, just some FAQs. If you want to contact the company, it seems easier to use social media – I tried emailing them, didn’t hear back, then got a mail a month later asking me to give feedback on the reply.  Certainly for the first few months I had the units, a lot of the Cardo website was broken, but that seems largely fixed now.

Their app (‘Cardo Smartset’) is well laid out, seems quite stable and allows you to set things up like a favourite contact for calls and such. It also tells you when firmware updates are available, and unit battery level.  I can’t say I’ve had much of an issue doing the simple things I wanted to do with it, and it hasn’t done anything exciting whilst I’ve been riding, which is a good thing as I also use my smartphone as a map/navigation system.

Enough of the talk, how is it to use?  The units are solidly made, and they click solidly into the helmet holder, but be sure to test it out a few times; once I hadn’t clicked it in completely and spent ten minutes before ‘re-seating’ it brought it to life, even though it looked like it was in.  Connectivity seemed to automatically setup between the two units most of the time, and at worse I had to use the app to re-connect the two. The only intercom issue I had is that my unit would sometimes drop, cueing an audio alert, but a tap on the correct button always brought it back.

Sound quality is very respectable out of the box, but I did try different ambient noise sensitivities, and they do make a difference, but the defaults were often acceptable. The rain resistance seemed fine in the misty and rainy days I’ve taken them out, the battery life is excellent, with a day of navigation instructions barely having an impact, and the units seem to hold charge well when not in use.  Volume and audio quality from my smartphone navigation unit was excellent, with no break-up, which reflects where Bluetooth audio usually is now.

As I noted, you need to memorise the various button combinations for some things on the unit, which isn’t too difficult perhaps, but as with any button only interface, if you make a mistake it’s not easy to cancel it all out without pulling over, though in my year I’ve only had to do that a couple of times. Answering a call with a single button, and dialling your present favourite was easy and worked as simply as it sounds. However, answering by voice I couldn’t get to work reliably, and usually resort to a button (I pull over to answer anyway).  I will confess I like to sing when I ride, and on some of the more boisterous parts of some songs, the Freecom would chime in with ‘User is not available’ thinking I’d issued one of the audio commands.

As the units charge from a standard micro-USB socket under a rubber flat, it’s easy to charge, and following the v2 update, you can use it and charge it either from the bike, or from a USB battery at the same time, which could be a factor on some tours, or if you’re generally forgetful.

These were my first comms units, and I’m actually quite impressed and happy that Cardo have rev’d the Freecom4 to a plus model as it somewhat justifies the design and pricing. It’s not as cool as the Packtalk range, but nor do I need either the features, or the amount of riding I do justify the expense. They’ve proven reliable and rugged, so no complaints really. That’s actual praise.

It’s also been good to talk to my passengers, even if it’s my partner telling me about her day if I pick her up from work, or making sure my kids aren’t sleepy on the back, or if they have any questions about something.  It definitely makes everyone feel safer if I tell them we have a couple of interesting turns coming up they can expect, if they’re lost in the scenery. A usage case I hadn’t expected is listening to a podcast in insane traffic, or whilst stopping to stretch my legs or at a meet up spot (as I’m early, not because I’m fast).