During Golden Week I thought I’d stop off and get some photos of people sea fishing off the beach and some of the jetties where the Hayakawa meets the Pacific Coast, so I packed up my cameras on to the bike, a flask of tea, and off I went.

(Golden Week is a collection of national holidays here in Japan, and is usually ~ 3days, but this year, with the new Emperor, we ended up with a metric pile of them.)

Unfortunately I had missed the memo which must have said that all the people I often see on that beach had to take the day off. Still, it was an interesting bit of coastline to take a look at, despite the emptiness, so lets see how much I can squeeze out of it!

I got off the main toll road which runs down and above the coast, and rode through some local streets, trying to find a road which looked like it would end appropriately near the beach itself. I found one by essentially following the dog walkers, re-enforcing one of those things about life – dog walkers always seem to know the best places. This particular road ended with a ramp and some steps down to the sand under the aforementioned toll road overhead, near some quite reasonably designed toilets and a barrier I expect is deployed in the busier summer months to stop people just driving on through to the ocean.

No, I did not take the Tracer down onto the sand. Therein lies disaster and tears.

So this was when I realised that the place was pretty much empty. I’d been hoping to watch the beach fishermen and women, and get some kind of insight into the hobby of beach fishing, but there was just a solitary enthusiast on the end of a pier, and he looked like he was ready to take a break anyway. He was perhaps disheartened that he too didn’t get the memo either.

This particular stretch of beach had a couple of types of coastlines defence too – tetrapods, and some dumbbell shaped ones I haven’t seen so much of – big lumps of concrete, whichever way you look at them. According to the not often wrong at all Wikipedia, around half of Japan’s coastline has tetrapods or similar. I’m not sure how accurate that is, but there are a lot of them around the place, but then Japan is an archipelago on the side of a vast ocean so defending the coastline is likely high on the agenda. It also creates construction jobs, and I’m sure friends of the government have liked that too.

I expect there is something oddly satisfying about these huge concrete blocks and the regularity of their shapes which appeals to your average bureaucrat.

Empty Beach .. but Always Someone

If there’s one thing I know from nearly a decade near this ocean, it is that there is always someone around the beach. There was the solitary fisherman, but then a trickle of people, some walking dogs, some seemingly just come to look at the ocean for a few minutes to take in the sights, sounds and smell and then head back to whatever they were doing. One older gent in his jogging outfit walked down the peer, drank his can of chuuhai (rice wine and in this case, lemon), and continued walking down the beach.

One thing I did get to see, amongst the damaged warning signs, mild amounts of rubbish (both washed up and dropped), was some interesting wall art. Along one wall we had some grafitti, and on another was a mural seemingly painted by a local school in the Summer of 2011, just months after the massive tsunami which devastated a large section of the north east coast of Honshu island. It seems odd it’s in the area under the road, rather that in the sea-facing side, but it is there, half hidden behind tetrapods.

More About The Waves

Another nod towards the waves which lap the coastline is a mural near the pier warning about high waves complete with a rendition of Hokusai’s ‘The Great Wave off Kanagawa’, just to get the point across. Whilst the surf was relatively quiet whilst I was there, it’s easy to imagine the odd rogue wave coming in, potentially knocking people in who weren’t paying attention.

Not a Life Boat

Whilst I was wandering, and drinking my tea, I noticed there was actually another ramp which I’d missed, and at the top was a small boat. For a moment I thought this was some kind of life-saving launch, a bit like the coast guard or RNLI we have in the UK, but when I got to the top it was obvious this was some kind of damaged and abandoned boat, which is a shame as it looked like it’d be a good size for the bay, and that ramp looked like there was some run rolling potential, but alas no. I do wonder if it was intended to launch from there at some point.

I have to believe come the summer proper, this place will be much busier as it has those big ramps and a fair sized toilet facility, so maybe in a few months I’ll come back and bring my bikini. Having often seen people here before, I think I just picked the wrong day in the midst of the 10 days of national holidays to celebrate Golden Week and Reiwa, and reminds me that sometimes you’re just not in the right place at the right time! 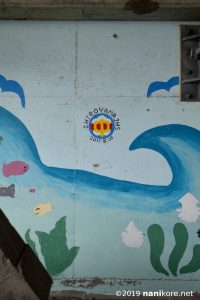 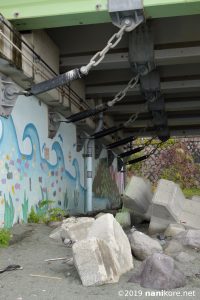 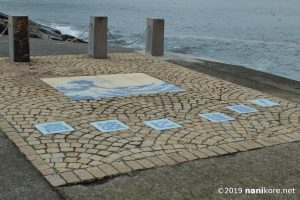 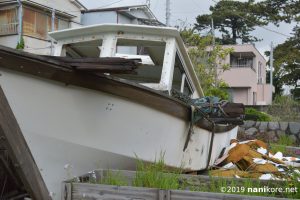 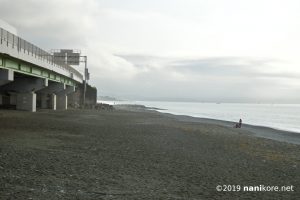 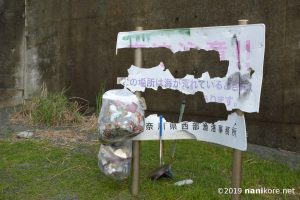 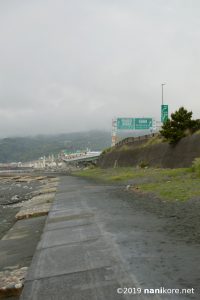 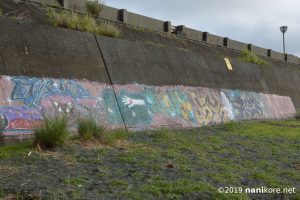 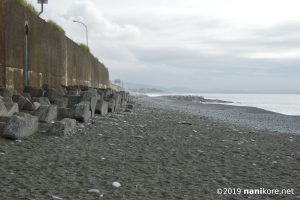 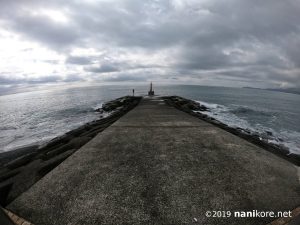 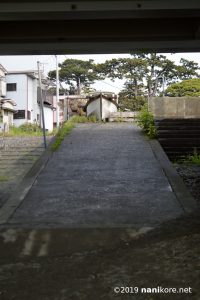